For the past weeks, we’ve been learning about the exciting ways customers are using announcements in Guru. We’ve seen how important it is for the leaders and execs who send announcements to see how their teams are connecting with the information they share. That’s why we’re releasing a series of enhancements to announcements that will help you see and understand engagement.

Note: Announcements are available on Builder plan and above. 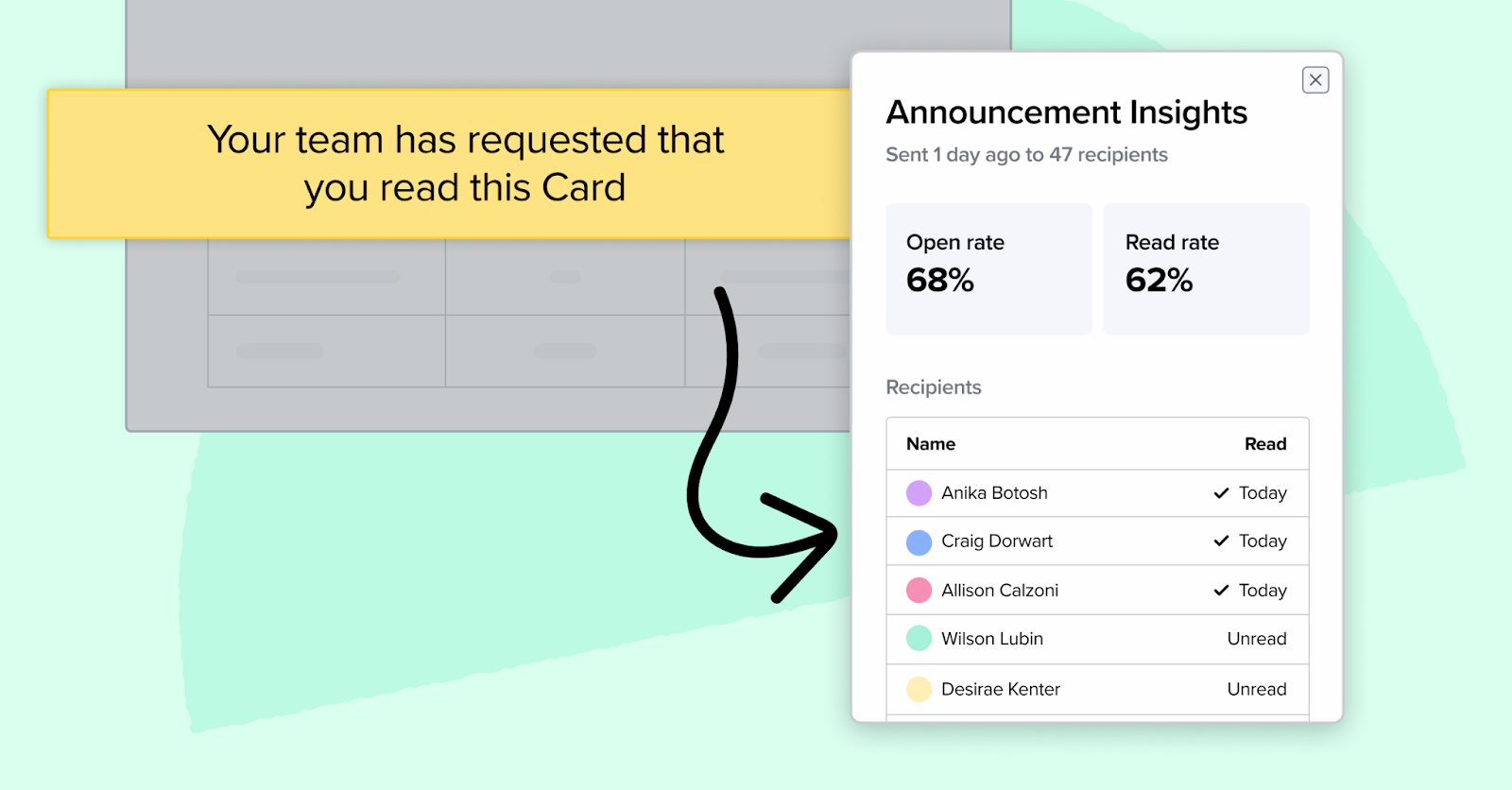 We appreciate all the customer feedback we’ve gotten on announcements so far, and we’d love to hear how you’re using them at your company! Post your thoughts in this thread, or head to the Product Feedback section to share your ideas.

This is such an improvement over the .csv and manual process! So great to see visually who has read on the card and giving users the ability to react with an emoji!

love to hear this, and glad it’s already useful to your team! Thanks for taking the time to share your feedback :)

So exciting! Love to see all of the different ways agents can now engage with announcements/comments. Hoping we’ll soon be able to track read rates of users over periods of time so we can follow up with the ones who are consistently not reading the announcements

It would be really helpful if there was a way to temporarily highlight changes to a card within the card itself. This would be especially useful for card updates: a quick highlight to direct the eye to the new/updated sections, that can disappear once the announcement is marked “read.”

I just sent one out yesterday - I wish I waited

Love these enhancements! Thanks, team!!

We track compliance for Guru announcements by user, and manually export the .csv files daily to update on a Google sheet. This way our supervisors can see compliance by user (i.e “Mackenzie Jackson” has read 97% of announcements, and which announcements are read/which are outstanding). One thing that would be super helpful for this is if we were able to have the compliance data auto-export into a Google sheet on a regular cadence! Happy to show you more of the document we have set up currently to see if this would be an option in the future.

This is great, my team noticed the announcement comment on the card on their own! Thank you.

Regarding the “Read Only” role user experience, can you walk us through what they can do and see specifically when it comes to seeing peers read count? Is it expected that they see this much detail and also given access to export data as seen in this screenshot?

A Read Only user told me they tried to export the data as pictured below and did not receive in email (also checked spam). Personally, I am hesitant on allowing this much access outside of Admin/Authors and “Leadership”. I’d like to learn more about that.

Does the extension not allow for comment reactions quite yet?

I love the react ability in comments, thank you!

Enter your username or e-mail address. We'll send you an e-mail with instructions to reset your password.

Sorry, we're still checking this file's contents to make sure it's safe to download. Please try again in a few minutes.

This file cannot be downloaded

Sorry, our virus scanner detected that this file isn't safe to download.